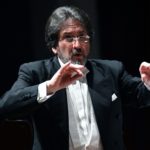 Walter Marzilli graduated in Gregorian chant, Music Pedagogy, and Choral Music and conducting at the Pontifical Institute of Sacred Music in Rome, where he also completed his PhD in Musicology.
He later spent a period of professional and academic formation in Germany, where he specialized in music for choir and orchestra and musical pedagogy.
He is a member of the Committees of the Lazio Regional Artistic Choirs and the Pontifical Institute of Sacred Music in Rome.
He is a Consiliarius of the Consociatio Internationalis Musicae Sacrae and member of the Governing Council of the Cultural Awareness Consulting, based in Germany. He is also a member of the Scientific Committee of the Conservatory F. Cilea of Reggio Calabria and the magazine Vox Antiqua. He is a member of the editorial board of the journal Choraliter, and was for two terms a member of the Artistic Committee of the Tuscany Choirs Association and of the National Artistic Committee of the Feniarco.
As a musicologist and choir director he has been invited to U.S.A., England, Spain, France, Germany, Switzerland, Holland, Poland, Hungary, Lebanon and Brazil. He has also been invited to hold Master Classes at major cultural institutions (University of Notre Dame, Indiana-USA, University of Yonsei-South Corea, Institut Sainte Rafqa de Musique-Libano, Coro Culiacan-Messico, Pesaro and Novara Conservatory…), and is often invited to judge choral singing competitions in Italy and abroad, as a member and as president of the jury
He has published numerous studies in specialized magazines: Armonia di Voci, Arte e fede, Bollettino Ceciliano, Choraliter, Diapason, Farcoro, La Cartellina, Lo Spettacolo, Musicae Sacrae Ministerium, Polifonie, International Choral Bulletin, and has collaborated with the Italian Institute of Encyclopedia Treccani.
He collaborates with the Cappella Musicale Pontificia “Sistina” and he is conductor of the Ensemble of the Sistine Chapel “Octoclaves”. He recorded with this Ensemble, a CD with musics as “First execution”. He conducts the Choir of the Pontifical Institute of Sacred Music in Rome, the Ensemble “I Cantori del Pontificio Istituto di Musica Sacra”, Calabria Regional Choir and the Madrigalisti di Magliano in Toscana.
He recently took the conduction of Corale “G. Puccini” of Grosseto.
He has been conductor of the Ottetto Vocale Romano and Quartetto Amaryllis.
As Orchestra Conductor he directed several productions with Bari Symphonic Orchestra, Orchestra of the Conservatory of St. Cecilia in Rome, Metamorfosi Musicali Orchestra, Musicus Concentus Orchestra formed by the Rome Symphony Orchestra, ‘Orchestra of the Pontifical Institute of Sacred Music, Orchestra of the Music Institute Ceccherini and of the Viotti Music Institute.
He collaborates with the Schola Cantorum Coloniensis in Germany and other countries. He has directed recordings and audiovisual works for RAI, BMG-Ricordi, Radio Vaticana, Libreria Editrice vaticana, Radio Classica, Westdeutscher Rundfunk, VM Records, Editore Discografico Crisopoli, TelePace, TV2000, IMD Music and Web and various Internet sites. He is Artistic Consultant and responsible for editing for Sistine Chapel Choir recordings at the Deutsche Grammophon.
He is professor at University of Notre Dame (Indiana – USA) an professor of choral conducting at the F. Cantelli Conservatory in Novara. He teaches psychoacoustics at the Mediterranean Center of Art-Therapy (Music-therapy Master), and has taught at the Choir Vocalism at the F. Cilea Conservatory in Reggio Calabria. He teaches singing at the Sedes Sapientiae International College in Rome, where he is also Director of the Department of Music, and has taught at the Pontifical French Seminary, the Pontifical College San Paolo and the Italian Academy of Lyric Opera.
He teaches choral conducting at ISMUS of Rieti, at the Biennial Cours of Reggio Calabria and at the Fondazione Guido d’Arezzo college for choir directors.
Sinc 1987 he teaches voice education and choir conducting. Since 1991 he is professor of choral conducting at the Pontifical Institute of Sacred Music in Rome.
He has presided over “Antonio Guanti” Choir Competition jury since the first edition.