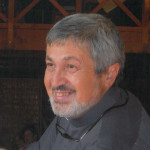 For 40 years Mons. Giorgio Costantino has taught Choral Training in Vibo Valentia and Reggio Calabria, where he was also coordinator of the experimental course for choral vocality and Member of the Academic Council. He started the course of Communication techniques (II level degree).

Since 1993 he is President of the Organizzazione Cori Calabria and of the Regional Choir, which he founded in 2006 giving the Direction to M° Walter Marzilli. Currently, the choir is composed by people from all over the region Calabria; they are selected through a test for vocal quality, musical skills and first-sight reading.

Since 40 years he is President of the Sacred Music Commission of Reggio Calabria diocese.

For 6 years he was member of the FENIARCO Artistic Commission and member of the editorial committee of “Choraliter”, which is a magazine published by FENIARCO itself.

By invitation from the Central Committee for the 2000 Great Jubilee, he held one of the official concerts for the Holy Year in the Basilica of the Holy Cross in Jerusalem with the Choir Laudamus founded by him in 1975. In this choir hundreds of young people were formed: now, many of them conduct choirs or are famous as singers in the best theatres in Europe and in the world.

In 1986 he founded an Instrumental Group formed by the choristers themselves who are graduate in various instruments.

He held concerts in many European theatres and Competitions receiving prizes and recognitions.

He recorded for RAI and other private broadcasting companies.

For LDC he recorded a world-diffused cassette with 30 polyphonic songs; he recorded the official cassette with the songs for the XXI National Eucharistic Convention; he recorded also the Concert for the 2000 Jubilee in the Basilica of the Holy Cross in Jerusalem (live) as well as recordings for festivals and competitions.

Along with 40 musicians, by invitation from the Vatican he attended the Seminar for the 2000 Holy Year concerning “Texts and Music in the celebrations at the Holy Father’s presence” (Vatican City, Oct. 5th-7th, 1998).

During the Holy Year, he was appointed to coordinate the choirs participation to Jubilee celebrations at the Pope’s presences by the Office for the Holy Father’s Liturgical Celebrations.

From the same Office he was called for the musical service during the Celebration for John Paul II’s 80th birthday in the presence of the Pope himself (May 18th, 2000) and for the Priests’ Jubilee. In this event, sent live from St. Peter’s Square, he directed 700 singers from 26 Calabrian polyphonic choirs.

On Novembre 9th, 2002 he directed a concert organized by the Italian Episcopal Conference for a meeting with 8000 operators for culture and social communication in the Nervi Hall at the presence of John Paul II. The concert was sent live by 60 channels in the world.

He was a component of the commission for the selection of singers for the World and Italian Youth Choir.

For over 10 years he was Artistic Director of the choral and classical concerts organized by the Municipal Administration of Reggio Calabria.

Since 23 years he is Director of the Choral Direction and Vocality courses held in Tropea and Gornelle for directors and choristers from all over Italy.

He held courses and conferences on choral music in Italy.

He published studies and musical essays on specialized magazines.