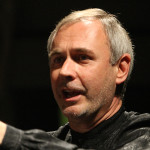 Dario Tabbia studied choral conducting with Sergio Pasteris at the Conservatory of Turin, where he graduated with honors, and then with Fosco Corti.

He devoted himself particularly to the study of early music. He was invited from musical institutions in Italy and abroad directing in major Italian cities as well as in France, Germany, Poland, Tunisia, Spain, Holland and Belgium.

From 1983 to 1995 he was Director of the University Choir of Turin, with whom he received important awards and prizes at national and international festivals and competitions.

In addition to his concert activity, he carries out an intense didactic activity. He has been invited several times as a teacher by the Conservatory of Utrecht. He regularly organizes choral conducting courses for the Feniarco and numerous choral societies Italian.

He founded in 1994 the vocal ensemble Daltrocanto which whom he participated in some of the most important festivals of early music and realized recordings that have received critical acclaim from the international press (Diapason, Gramophone, Repertoire, Le monde de la musique) in addition to the Italian critics Award in 1996 and the Amadeus award in 1997.

In 2008 he founded the vocal ensemble Vox Libera and the Chamber Choir of Torino.

He has been a jury member in prestigious national and international choral competitions such as Arezzo, Varna (Bulgaria), Vittorio Veneto, Quartiano, Stresa, Malcesine. In 1991 and 1992 he was the director of the symphonic Choir of RAI of Torino. He worked together with great musicians such as Georgy Kurtag, Luis Andriessen, Robert Robertson, Zoltan Pesko, Frank Shipway, Jordi Savall and Ottavio Dantone.

He edited the review of the book “Il respiro è già canto” about choir conduction written by Fosco Courts and published by Feniarco.

In 2010 he won the first prize at the VII edition of the “Premio Nazionale delle Arti” with the Chamber Choir of the Conservatory “G. Verdi” of Turin.

In 2011 he received an invitation from the National Choral Federation to teach a course on the interpretation of Italian choral music in Israel.

Since 1983 he is Professor of Choral Practice at the Conservatory of Turin. He is a member of the Feniarco Artistic Commission and of the European musical Commission “Europa Cantat 2012”. In 2010 he was appointed director of the Italian Youth Choir with Lorenzo Donati.

This site uses Akismet to reduce spam. Learn how your comment data is processed.